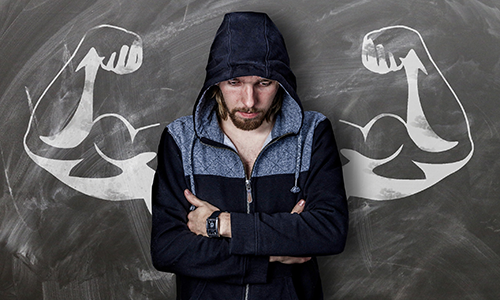 Exercise or workouts are very essential to maintain good physique and overall health.

Another motive behind doing the workouts is to have a great body to show off!!!

There are two categories of exercises:

1. Compound exercises– These are the exercises that target multiple muscles at a time. These are generally performed to gain overall upper body and lower body strength.

2. Isolation exercises– These are the exercises that target one particular muscle at a time. These exercises are performed to build muscles and gain strength in a particular part of the body. It shall include arms, legs, back, chest and so on.

We are here to discuss about the best exercises to build bulky biceps. Now to have big biceps, it is essential to focus more on isolation exercises as compared to compound exercises.

Big Biceps are most likely the first thing that we notice in an individual. But, there are not many individuals that have achieved this fit, because they were not completely focussed on their arms training.

Now, in order to make sure you have big or bulky biceps, it becomes important that you understand the anatomy of your biceps.

Our biceps are divided into three parts:

1. The longer heads– The outer region of your biceps.

2. The shorter heads– The inner region of your biceps.

3. Another part of the biceps includes the brachialis muscles- It is present beneath the biceps and helps in flexing the elbow.

The type of exercises you choose to do shall determine the individual growth of the longer and shorter heads. The brachialis when developed properly can help push the biceps and make it look bigger. Thus, it helps to separate the biceps and the triceps.

Now, for individuals that want to train their biceps, it becomes necessary to choose exercises that target their longer heads, shorter heads and the brachialis as well.

Moreover, as the longer head gets stretched more in comparison to the shorter head, it allows producing more force for the workout. Also,research shows that the longer heads of the biceps stay activated throughout the motion of the exercise, in inclined dumbbell curls.(1) This is not seen in a majority of the biceps exercise.

This is another great biceps exercise (isolation), which puts more emphasis on the shorter heads of the biceps.

An extensive research shows that concentration curls put the most amount of biceps activation compared to other exclusive bicep exercises.

Concentration curls exercise is also considered as the best biceps exercise, as it minimizes the activation of the frontal deltoids. It is often found to get activated during other curl workouts.

Studies suggest that concentration curls not only improves the biceps activation but also reduces the front deltoids (shoulders) activation to the minimum. This happens because; during the exercise the elbow is pressed onto the thighs, which prevents the arm getting swayed away and thus reduce the shoulder involvement.

This exercise is specially recommended to give more emphasis on brachialis muscles and the brachioradialis (forearm muscles that flexes at the elbow). When these muscles are completely developed, it helps in improving the aesthetics (shape) of the arms.

The reverse EZ bar curls are included in the list as they help to target the brachialis more. The brachialis has only one function i.e. the flexing the arms. This is not possible with the supinated grip like other biceps exercises do.

Therefore, using a pronated grip and with reverse EZ curls is advised, as it helps to shift the muscle activations from the biceps to the brachialis. There are other biceps curling exercises too, but they give more emphasis on the biceps than the brachialis, stated accordingly in a research too. (2)

Another effective biceps exercise is the barbell biceps curls. This is a recommended exercise, as it allows you to pump up your biceps with heavy weights. Beginners are recommended to start with barbell curls, instead of dumbbell curls, as they will be able to do more number of sets. It is also referred as a strength building exercise.

The movement of the exercise plays an important role. Make sure you focus on the eccentric phase of the exercise i.e. when you lower the barbells. Keep the movement slow and lower down in a controlled way. This shall prevent bad form and help you to workout with more intensity and get better results.

An extensive research with different biceps exercises shows that Chin-ups make the list of top three exercises for big and bulky biceps. It also showed Chin-ups cause more biceps activation than a majority of the isolation biceps exercise, such as Concentration curls or EZ curls.

Chin-ups are a recommend exercise, because of its compound movement (both flexing and muscle contraction). Moreover, according to a study, biceps consists of type 2 muscle fibres that get activated with heavy weight exercises. (4) Thus, it is found, as you increase the weight load in the exercise, it increases the biceps activation as well. Chin-ups allow you to add more weights with ease and thus are beneficial.

Keep in mind any heavy weight exercise that you do, the form of the exercise becomes very important. With the bicep exercises the type of workouts you choose shall determine the growth of the particular muscles.

Even though a majority of the bicep exercises are isolation exercises and they are less prone to cause injuries. You still need to be careful while working with weights. For every exercise mentioned above, 3-4 sets per session are recommended. For curls you can keep the reps count to around 8-10 reps per set, with the weight you are comfortable with. For chin-ups it is recommended that you do the workout till muscle failure to get best results.

MuscleMaxim aims to support individuals of all ages that have interest in bodybuilding, training and workouts.

It provides you with the information about how to train, what to eat and help you focus on building strength and getting stronger.

Articles on MuscleMaxim are focussed on the best diet, nutrition, exercises, supplements and other essentials that help build a perfect body.

Muscle Maxim is a free fitness content blog. To support the blog, we may include affiliate links within the product suggestions. By purchasing anything through the links, may get us some revenue. But it will not cost our reader anything extra.  “As an Amazon Associate We earn from qualifying purchases.”